Ever since student-athletes have been able to profit off their name, image and likeness, the world of NIL has experienced tremendous change and growth in the form of law changes and increased media exposure.

One way South Carolina athletics has navigated through this ever-changing environment is through the creation of Gamecock Exchange, a new platform that allows student-athletes and businesses to connect directly and facilitate NIL partnerships and launched on July 1.

“The Gamecocks Exchange will make connecting with our student-athletes easier than ever for businesses,” athletics director Ray Tanner told GamecocksOnline. “We are proud to continue our pursuit of excellence in the name, image, likeness space and are excited for the future of NIL programming at South Carolina.”

Interested businesses can request access to the platform, where they will have the ability to contact any South Carolina student-athlete upon approval. According to the Gamecock Exchange website, approvals can take approximately three to four business days.

From there, they can send messages to every student-athlete in the portal or use specific filters — based on characteristics such as academic major or social media following — to find the perfect fit for their company.

“That works well for a business who may not know exactly who they’re interested in, but they know that they either want to support student-athletes at South Carolina in the NIL program or that they would like to start working with student-athletes,” Hilary Cox, the associate athletics director for administration, said.

Cox, who specializes in NIL, said convenience and cost were among the many benefits the platform will provide both student athletes and registered businesses.

“Payment can be taken through the app — it’s free to both parties,” Cox said. “The university is paying for that on the front end, right, so there’s no fees associated with using it, and it’s just really a great platform to kind of have everything in one location to get NIL deals done.”

Plans for Gamecock Exchange began in the spring of 2022, while the athletics department was negotiating with members of the state legislature to suspend South Carolina Bill 685. At the time, the bill prevented universities across the state from facilitating NIL deals for student-athletes despite the NCAA’s ruling on the matter. Enacted on July 1, 2021, the NCAA’s ruling established a uniform NIL policy across its three divisions, permitting student-athletes to profit off their name, image and likeness, but only if it was legal for them to do so within the state in which they attended school.

The suspension of the state bill became active one year later on July 1, 2022, allowing the university, as well as others across the state of South Carolina, to fully maximize its NIL capabilities.

“With that suspension, we kind of did a 180 with what we were allowed to do within the state of South Carolina,” Cox said. “Even just in the last two weeks, we’ve kind of flipped and were able to, for instance, facilitate deals now for our student athletes, whereas before, we weren’t allowed to do that.”

With this in mind, the athletics department sought a more convenient way for companies to get in contact with student-athletes.

“Staff members got a lot of emails of, ‘Hey, can you connect me with this person?’” Cox said. “We just needed a better way to do that, so just through our research and our previous partnership with INFLCR … it made the most sense because the student athletes were already using the app.”

INFLCR, a brand-building company whose software has been used by more than 250 collegiate and professional organizations, has partnered with the university since last year to share photography and video content with student-athletes.

According to Cox, sharing this content and allowing student-athletes to post it on their social media plays a large role in their abilities to build personal brands.

“It’s the cornerstone of what we’re seeing in the NIL space,” Cox said. “I’m not saying that social media is dictating everything in NIL world, but businesses want to work with student-athletes who have a large reach.”

The university has started becoming active online regarding NIL-related activities as well. It recently created a NIL-specific Twitter account, and made themselves available to the media to help educate the public about these opportunities.

“We’re being very transparent with our fans and our followers … We’re not only celebrating our student-athletes and their unique NIL deals, but we’re also trying to educate the public,” Cox said. “We try to do as many media appearances, podcast appearances as we can just so that we can get as much information out there.”

South Carolina sports fans are not the only people getting educated about NIL. Cox said the athletics department has already organized presentations for the football and men’s basketball teams and will facilitate more NIL education opportunities during the school year.

“When everyone’s here during the academic year, we’re consistently trying to meet with them just to do a five, 10, 15-minute education,” Cox said. “We’re offering online education sessions. We have a slew of resources that we’re continuing to build out.”

Cox said South Carolina’s coaches are educating themselves about NIL to better communicate to recruits about what the school has to offer. Some coaches, like baseball head coach Mark Kingston, are embracing NIL because they know it is becoming more relevant in the world of college sports.

“We’re hoping we can keep up and be a factor in that market because it’s necessary,” Kingston said. “It’s just where sports are going, and so you’ve got to try to keep up with the trends. You just do.”

Cox does not know what the future of NIL may hold, but she does know that the university will remain flexible while sticking to its three pillars of success for NIL.

“It’s a moving target right now, but it’s important for us to stay as flexible as possible, as nimble as possible and just recognize that there’s going to be ebbs and flows,” Cox said. “At the cornerstone of what we’re doing is this education piece, connection, facilitation … helping them maximize their opportunities, so as long as we’re still focused on that, then we feel good with where we’re going in the future.”

Sat Jul 23 , 2022
NEWYou can now pay attention to Fox News articles or blog posts! The San Diego Unified Faculty District Board president is less than fireplace for instructing learners who will never don masks to keep property from normal university and choose for Zoom courses rather.   Indoor masking is now needed […] 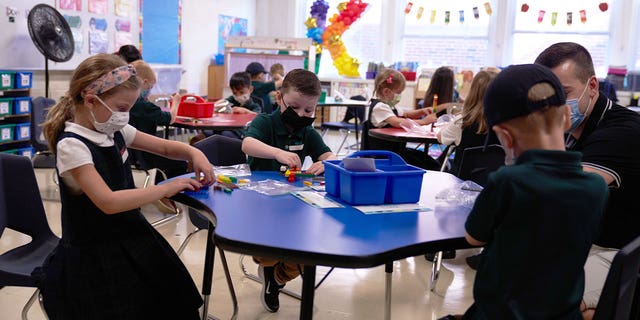